What if we could harness the energy produced by the sun and maximize its potential to power electric vehicles (EVs) with zero-carbon electricity? That’s exactly what the Great Plains Institute, which facilitates Drive Electric Minnesota, has been working on in a pilot project that studies how managed EV charging can pull varying levels of power from the solar panels on our rooftop based on how much solar is being produced at a given time. This ability to use “solar synchronization” could have big implications for reducing carbon emissions in both the electricity and transportation sectors, and presents potential benefits for consumers and businesses alike.

EV adoption continues to increase. More available models, decreasing prices, increasing visibility, and growing consumer confidence that these vehicles will get them from point A to point B are all contributing factors to the shift away from conventional fuel vehicles towards plug-in hybrid electric (PHEV) and battery electric vehicles (BEVs).

EVs are also often sought after for the low regular maintenance costs and the significant reduction in greenhouse gas emissions associated with their use. However, a vehicle run on electricity is only as clean as the fuel used to make that electricity.

This is the second post in a series sharing the Great Plains Institute’s (GPI’s) results and insights from the pilot project at our headquarters to synchronize on-site solar energy production with EV charging using a managed charging system. Here’s what to expect:

What is managed charging?

Managed charging is the ability to adjust the level of power used in an EV charger depending on certain criteria. Changing the level of power changes how quickly or slowly the plugged-in vehicle’s battery will charge. Most of electronic chargers you likely encounter in your everyday life generally have a fixed power level, meaning that the speed at which the device charges is always the same. If you wanted a faster charge for your cell phone, for instance, you might choose to switch from a standard charger to a lightning charger. In this case, you would be switching between two fixed options—either very fast or very slow.

Managed charging is different from this in that it operates on a sliding scale, allowing that level of power to adjust up or down between many different levels of charge without having to switch chargers or turn the charger off. While managing the power level drawn by your phone may not make a difference on your schedule or electric bill, managing power for a larger resource like an EV makes a significant difference. This makes the ability to control the level of charge for EVs valuable to users, business owners, and grid operators.

There are a number of ways to decide when to adjust charging level up or down. This concept is being introduced across the nation in various programs and incentives, such as:

At GPI, we’ve linked our EV chargers to the level of renewable energy being generated on-site by rooftop solar panels at our headquarters.

The Great Plains Institute is running a managed charging program for EVs at our office in Minneapolis using three smart charging stations connected to a solar array on the roof. The solar array was upgraded and the EV chargers were installed in our parking lot in June 2017. If we can understand the optimization of solar panels and EV chargers together, we can lower the emissions of the electricity used to power the EVs.

For the past two years, the GPI research team has been tracking, collecting, and analyzing data on the managed charging system to understand it’s viability, impact, and opportunities for improvement. A previous blog post walks through the project development in 2017, including our collaboration with ZEF energy, the charging station provider, to set up the data tracking system for the chargers.

There are a variety of EV chargers with different voltage levels available on the market. Our chargers are Level 2, which means that they operate at 240 volts, an intermediate power level between Level 1 chargers (120 volts) and “super” chargers (up to 480 volts). At the 240-voltage level, our chargers can provide many different levels of power, measured in watts (w) or kilowatts (kW).

How do the chargers know what level of power to put out? Our managed charging software determines the power level based on the amount of solar energy generated on-site at any given time. Specifically, the charger software communicates with the solar panels to determine the current solar energy generation, and will not let vehicles charge at a level exceeding that generation. The only exception to this is when solar production drops below 1.5 kW, at which point the chargers will continue to charge at a minimum 1.5 kW level to so no EV is left uncharged.  (See our﷟ previous post on how seasonal or daily solar variation impacts charging).

This type of managed charging is often referred to as solar synchronization. On bright, sunny days where there is plenty of solar energy generation, the chargers will ramp up to a higher power level to take advantage of all the available solar energy, charging vehicles more quickly. On cloudy, low generation days, the chargers will ramp their power down in proportion to the reduction in solar being captured. These chargers are highly responsive and adjust frequently, ramping up and down several times a day, such as when clusters of clouds pass overhead or when the sun sets. 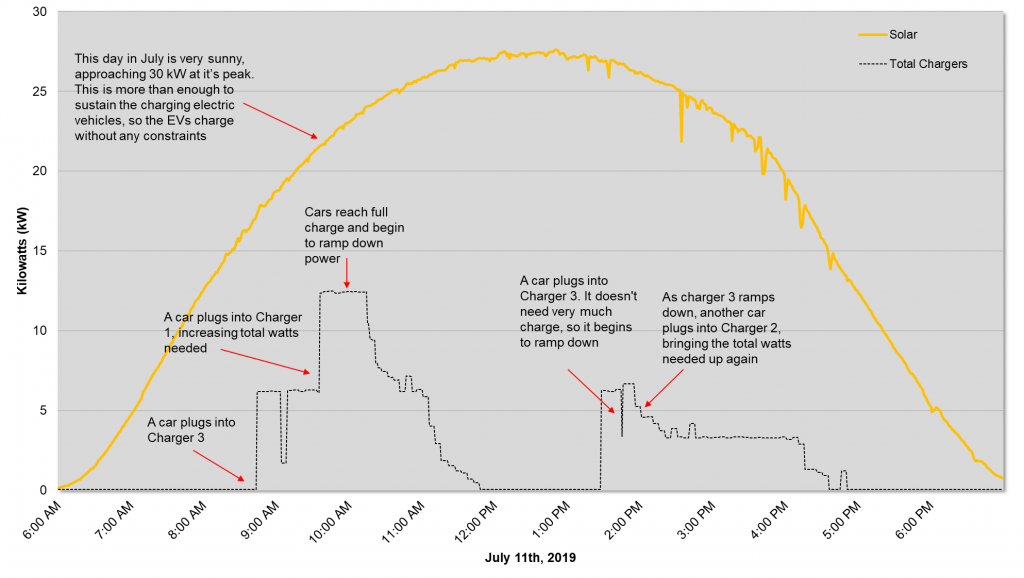 The figure above shows a high solar, high charge day. The yellow line shows the solar energy generated by the solar array at the GPI headquarters in the Greenway Building, and the black line shows the total demand for power (also known as “load”) of the three EV chargers. As you can see, on this day there is more than enough solar electricity generated to offset use by the chargers.

Adjusting energy demand is one of many ways to make sure that electricity used is “clean,” or carbon free, and is effective in a wide variety of scenarios. We’ll dive into how managed chargers react in a variety of different solar generation scenarios in our next post in this series.

This post originally appeared on the Great Plains Institute site.

Interested in how adjusting energy demand can be useful beyond solar synchronization? Check out our “Shave, Shift, Shimmy” blog.

Want to learn more about our EV+Solar synchronization project? As GPI has tracked the interaction of EV chargers with the solar array, we’ve had a chance to make some observations and generate some key takeaways. Stay tuned for parts 2,3 of this series to learn more.

About the Great Plains Institute (GPI): A nonpartisan, nonprofit organization, the GPI is transforming the energy system to benefit the economy and environment. Working across the US, we combine a unique consensus-building approach, expert knowledge, research and analysis, and local action to find and implement lasting solutions. Learn more at www.betterenergy.org.