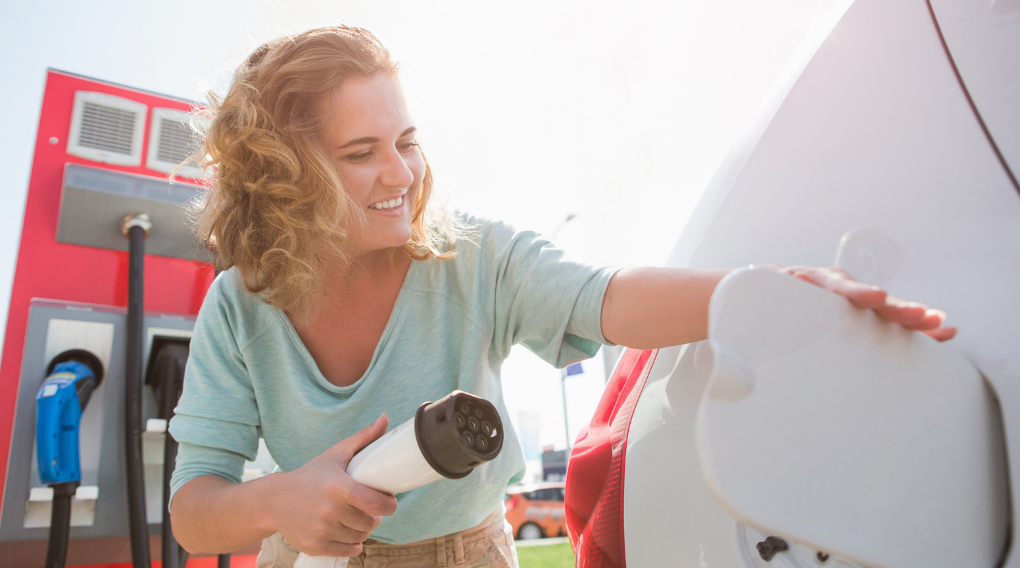 Woodbury, Minnesota, a city of about 75,000 people located in the Metro region of Minnesota and has adopted many electric vehicles (EVs) into their city fleet. I caught up with Jen McLoughlin, the sustainability specialist for the City of Woodbury, to learn about the city’s journey of electrifying its fleet. McLoughlin shares Woodbury’s process and highlights how staff experience with EVs changed perceptions over time.

This post is part of a series of interviews with staff of Minnesota cities that are transitioning fleet vehicles to EVs. Cities interested in EVs can learn from the experiences of these cities, including Carver, Eden Prairie, Faribault, and Woodbury. Cities can also use the City Resource Database to find and connect with Minnesota cities that have incorporated EVs and EV charging infrastructure.

In the past, Woodbury had two Volts that were purchased on the used market. However, their fleet electrification efforts were stalled for a few years because it was difficult to find used EVs. Efforts have resumed, and Woodbury boasts a total of eight EVs in their fleet: six Mitsubishi Outlanders and two Chevy Volts. The Outlanders are used by building inspections, utilities, and public safety staff while the utility department drives the Volts.

One of the internal barriers Woodbury staff faced when considering switching to electric was the limited availability of EV models from manufacturers of the City’s existing fleet vehicles. There was hesitation to switch from US manufactured vehicles—which they had much experience working on and were comfortable with—to manufacturers like Nissan or Mitsubishi.

Jen McLoughlin credits the Cities Charging Ahead (CCA) peer cohort with helping overcome this barrier. Through CCA, McLoughlin heard from other cities that the Mitsubishi dealership in White Bear Lake supports ride and drive events for city staff and residents by providing vehicles. The city collaborated with the dealership on a ride and drive event attended by public safety, building inspections, engineering, and public works, and City Hall staff. They got a chance to test drive EVs, and it was a very positive experience for all participants. Shortly after the event, the city purchased one EV, and another soon followed. Since then, the city has purchased more EVs as old fleet vehicles come up for replacement. In January 2022, two more Outlanders will be added to the City’s fleet.

Woodbury participated in a Fleet Carma fleet analysis funded by Xcel Energy. While the analysis provided some recommendations for which vehicles were the best candidates for electrification, the city didn’t act on the recommendations due the nature of their replacement schedules, and because the recommended vehicles did not meet the required criteria for the vehicles that would be replaced.

As a participant of Xcel Energy’s Electric Fleet Pilot Program, Woodbury will again receive funding for the new fleet analysis through Xcel Energy. McLoughlin hopes this study will provide more insights into converting their fleet to electric than the first analysis. Sawatch Labs, the company performing the analysis, was very involved in helping make the choices about which vehicles would be best to evaluate.  As a part of the fleet study, 23 traditional gas vehicles will be analyzed for 90 days, and 8 hybrid EVs will be analyzed for 12 months. The study will also evaluate the total cost of ownership for vehicles.

McLoughlin looks forward to identifying driving behaviors that can help make EVs as efficient as possible, especially during the cold winter months when the range of a battery slightly declines.

The first EV purchased after the ride and drive event was used by the building inspections staff, who had requested an Outlander as a first step into the world of EVs. Once staff drove the vehicle and saw how well it fit their needs, they requested more. Since Woodbury is converting vehicles to electric as old fleet vehicles come up for replacement, the cost of the vehicles is integrated into the city budget.

Despite the initial skepticism, the EVs have received positive reviews from those who use them. Building inspectors and utility staff are assigned to a vehicle, while the public safety staff rotate who uses their EV. Staff have reported being impressed by the acceleration of the vehicles. Building inspection staff appreciate that the Outlanders can easily access job sites under construction. The Chevy Volts are well liked too, with the only complaint received about them are from taller employees who find it harder to enter a small vehicle. McLoughlin reports receiving lots of support for the transition to EVs from staff driving the vehicles.

Originally, Woodbury charged their EVs using only regular Level 1 outlets. At the end of 2020, the city added a Level 2 charger at the fleet services building to add additional charging capability.

Looking forward to 2022, the City Hall parking lot will be under construction. Woodbury will take advantage of Xcel’s infrastructure program to upgrade all the electric infrastructure between the transformer and the charger and install five dual-headed chargers (a charger with two cords). Conduit will also be laid to prepare for future installation of EV chargers to accommodate an expanding electric fleet.

Advice for Other Cities

McLoughlin reflects that having an opportunity for staff to test drive EVs was key to Woodbury’s success and could work well for other cities looking to make the transition to electric. According to McLoughlin, “The ride and drive event allowed staff to test any negative preconceptions they may have had, resulting in a very positive experience, and new support for EVs within the fleet,” She also stressed that cities should recognize that transitioning to electric isn’t something that happens overnight—it is a process that might take a while. Still, internal support from key decision makers, like the public works director and fleet staff, can make the process smoother. Once you have one electric vehicle, it gets the ball rolling for more. “Considering that there was a lot of skepticism at the beginning, we’ve come a long way,” McLoughlin added as a final thought.

Woodbury is already planning to expand its electric fleet; as evidenced by the charging infrastructure it will install to accommodate more EVs. The city is interested to see what it can learn from the fleet analysis and how it will shape EV purchases in the future. The city currently has an all-electric pickup truck on order and is researching additional EVs.

Connecting with cities like Woodbury, which have made great strides in fleet electrification, could be helpful for your city’s journey. Use the City Resource Database to find and connect with Minnesota cities that have incorporated EVs and EV charging infrastructure in their city.